It makes me feel dirty 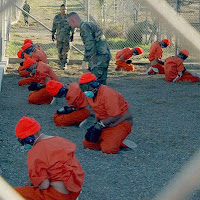 Barack Obama—the same man who falsely promised to close Guantanamo Prison—now has several times more people locked away without charges than Bush did, and he is planning to expand the capacity of the Parwan Detention Camp from 3,500 to 5,500. How can any of us claim to be moral people when we surrender money to an immoral entity like the United States government so that it won’t treat us with quite the same contempt for human rights that it treats others? If we too support evil, how are we more moral than those who supported Hitler?
Posted by Snowbrush

ugh, i feel dirty now too. do you have links to where you found this info--i'd love to read more.

And the dirt is here too, when we follow unquestioningly.

I know......the disappointment is palpable, though not entirely surprising.

I've lost respect for pretty much our entire government in the past few years. I'm so sick of hearing of politician's money-grubbing and their greed and blatant disregard for individual humanity. I'm with you on this one. xo

Amen, brudda. Exactly why we must look not to the whorizontal, but to Heaven for our help. God blessa youse -Fr. Saducci, ol SNL

Perhaps now we can understand the Germans of Nazi Germany.

all I can say is we have got to really look very carefully at our next election and make better choices (provided we have better choices out there, slim pickings no matter what party)

Oh my gosh, I feel dirty just looking at the picture. What news is this? Do you have any references that i can refer to?

I want to be sure I understand you correctly.

You have to surrender your money to someone. You can't take it with you. Would you rather surrender it to Al-Quaeda maybe, or the People's Republic of China or Hugo Chavez or Fidel Castro?

I feel we may be on opposite sides of this issue, although I am no fan of Barack Obama. I guess the ultimate insult from the left is to say "worse than Bush"...I am rambling now.

do you know mit{mutt} romelnee{romney} said that with iran, he would go to war, and that if obama is elected we won't go to war and so that means the first thing mitt would do if elected is go to war with iran

the republicans and now maybe even the democrats are war mongers<><>,.i think because it is good for the economy and business, isn't mitt a businessman????

Sarah asked: "do you have links to where you found this info"

Punk asked: "I feel dirty just looking at the picture. What news is this? Do you have any references that i can refer to?"

The photo is one of many well-known shots from Guantanamo--I couldn't find one from Parwan. I heard the story on the television news while doing housework, so whether it was on NBC, CBS, or PBS, I'm uncertain. When Sarah asked for a source, I went looking for one, and was horrified to find that I had misheard Bagwan for Parwan, so I changed my post accordingly. However, I couldn't find anything online about the overall number of detainees under Obama versus under Bush. The information is surely there somewhere, so I'll keep looking as I have more time, but if you find it first, please let me know.

No, that's not what I'm saying.

Rhymes asked: "are you saying go ahead and file your income tax form...but just admit that you're immoral, and ranting on a blog will make everything okay?"

Or are you advocating riots in the streets?

No. Not paying taxes would get the message through more effectively.

Peggy and I are of a different mind about what is moral in regard to supporting the government, so we pay taxes in the interest of marital harmony. If Peggy were to die or divorce me, I like to think I would stand behind my principals and become a tax resister. In that case, I would have to live very simply indeed because the constant threat of the IRS confiscating my possessions wouldn't justify owning much. As it is, I'm living an unprincipled life in this and various other ways. There's gray, there's white, and there's black, and I'm in the gray area about many--if not most--moral issues, and in the white about a few. Interestingly (to me anyway), Peggy has a great many more moral scruples than I do, yet I have some that she doesn't, and I'm more inclined to fight for a principal than she is. I won a battle just this week after I complained to the Oregon Attorney General about a local car dealership's false advertising regarding a $35 coupon. I do that kind of thing a lot. Of course, taking on the IRS would be another matter because the law would be against me instead of with me, and I'm not going to do it while I'm married. I can but hope I would have the guts to do it if I wasn't married.

What do you make of this, Snow? How long do you think it would take for this country's greedy capitalistic tendencies to notably subside?

"How long do you think it would take for this country's greedy capitalistic tendencies to notably subside?"

Why ask ME such a hard question--do I look smart to you? I don't know if some cultures are greedier than others. I guess they could be, but maybe it just looks that way when opportunities that can go so wrong and hurt so many people abound. We've been pumping out billionaires in this country, and few of them ever do anything of value to earn that money; they get it by screwing over the rest of us. I'm in complete sympathy with the OCCUPY movement, but it sure looks like its foundering, and I don't know what form the next revolt against living in a country whose leaders are owned by big business will take. Did you hear about how pizza is now considered a vegetable in school cafeterias because our legislators wanted to suck up to the frozen foods lobby? How much more blatant can you get? How much more proof would anyone need that this country is not run for the benefit of the people who live in it--except for the ones who can afford to buy legislation?

Geez... when I read comments like yours Snowbrush it renews my faith in the American people.
We have similar problems here in Canada and our latest fearless leader is a warmonger wanna be!!!
I have developed a distinct dislike of all governments.

I figured the upcoming elections would be easy: just vote for anyone who is not Obama. But the list of idiots we have been given for contrast makes me wonder if there's a conspiracy to get the "O" re-elected. Couldn't they have found someone, anyone, who has a lightbulb of intelligence rotating above his head?

Good questions here....I pay taxes because I am afraid of the all powerful IRS. They answer to no one. Years ago my husbands ex-wife inherited some money which she didn't pay taxes on...the IRS came after my husband. Try living on minimum wage with 4 teenagers to support.
I read the comments here. Violet asks when the greed will subside, my answer would be when the Federal Reserve is no longer in charge. And that just isn't going to happen until people realize that they are NOT part of the our government...they are the banks...and their greed is endless and they own us.
Vote for anyone but Obama...? My disappointment and contempt for him is big...but Newt,the front runner of the moment, vote for him? The man who says child labor laws are stupid? Fire the union janitors from the 'failing' schools and let the poor kids take their place? Honestly what kind of people are we that there is no outcry over ideas like that? Or maybe the governor Texas, whose name won't come to me? He says he has no problem with the fact that innocent people are put to death in his state....
I think the inmates have taken over the insane asylum and that we the people, for the most part, are pretty ok with that.
I guess my point is I don't believe anything but a full out revolution is going to change anything...the ruling class in this country are all the same, puppets of the FDD, until that changes, nothing changes..it's a down hill ride from here. I listen to the Thom Hartmann show..he told about a poll yesterday that found that people who watch FOX news know less about what is going on in the world than 40% of people who watch no news at all...sigh...
Go Occupy!!!!

The person who said that we could maybe understand the people of Germany a little better has it correct. Little by little you get in so deep you cannot get out. The Nazis came to power supported by the establishment in opposition to the Communists who were very strong in Germany at the time.

Holy crap! I am ashamed - but not surprised - by our government. It irks me that where I live, you are labeled unAmerican if you don't support the government. But I don't. No way, no how.