5 Things: none of them about religion 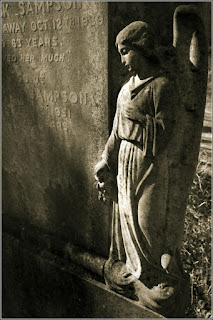 Ellie has lived next door for nine years, and is like a sister. In a few months, she will move 1,000 miles away, and Peggy and I are both very sad.

Walt came by last week. He was best friends to both Peggy and me for a lot of years, but hasn’t been our friend for about eight years, and it wasn’t an amiable parting. If I hadn’t sent him an occasional email during the past eight years to ask how he was, we wouldn’t have heard from him at all. He came by to tell us that he was diagnosed the day before with malignant melanoma, the tumor reaching two inches across before he saw a doctor. Peggy and I went to the hospital today to wish him luck as he went into a hastily arranged surgery. We arrived to find his wife berating him, and his father-in-law looking like he wanted to cry. I added to the ambiance by sitting in silence reading the obituaries (as with the tombstone in the picture, many of the deceased were my age) while feeling sick, sad, and distant. Only Peggy offered any real support.

Six weeks ago, I had sudden onset fatigue so severe that I couldn’t stay out of bed for more than an hour or two at a time. I seriously thought I might die so, not knowing what the problem was, I immediately stopped taking oxycodone, Neurontin, Ambien, marijuana, and Cymbalta (I’m back on marijuana and Ambien). In the wink of an eye, I fell over an emotional cliff. Now, I still have the chronic pain problem for which I was taking all the drugs, plus I have fatigue, fever, sweaty scalp, depression, irritability, tremulousness, scratchy eyes and throat, and a tendency to drop things. All this, and I still don’t want to go a doctor because I get tired of the same shit happening. To whit, the first doctor sends me for various tests (some of which might be dangerous), and then I get tossed back and forth between specialists (and their tests) for anywhere from a few months to a few years. After shelling out $4,000 before insurance pays the first penny, having up to three surgeries, making countless calls to insurance companies and billing offices, and being put on even more drugs, I still have the problem. If I’m lucky, it’s just not as bad as it was. Of course, by not going, I could end up like Walt. I know that, but still I don’t go.

It’s winter in Oregon. Month after month of almost nothing but gray and drizzle, except for a couple of periods during which the sky clears for a few days, bringing with it wind, cold air, and a sun that stays too near the horizon to be really cheerful. Peggy enjoys life here and has no trouble with the weather. I like many things about Oregon, but it’s only her desire to be here and the presence of a few friends that keep me.

Peggy and I getting rid of a lot of things today, mostly keepsakes. I am very pleased about this because I am finding it increasingly difficult to clean house. We celebrated our 41st anniversary in December. She has been a good wife.
Posted by Snowbrush 24 comments: Links to this post