Every morning, I lie in Peggy’s bed while she massages my shoulders. I look through her window into a canopy of green and, if I squint, I see faces in the canopy. Today, I saw a buck-toothed cocker spaniel without a lower jaw. His green ears blew in the breeze, and his eyes were as intense as those of a space alien from a scary movie. Last winter, the leaves being gone, I saw the same poker-faced gray cat everyday for months. These canopy denizens stare at me as I stare at them, and they seem more real to me than the 23 children who died in India last week.

A great many atheists are literalists who think poorly of the impreciseness of metaphor, the emotionalism of symbols, and regard mythology as the inadequate expression of ideas that aren’t worth expressing.

Thirty-five years ago, I worked as a paid carpenter at a farming commune near Natchez, Mississippi. I never talked to any of the residents about religion or spirituality, but noted that they lived literalistically if not mechanically. I say this partially because of the scorn they felt for holidays. They avowed to make everyday as special as every other day, but the result was that they made no day special. Or so it seemed to me. 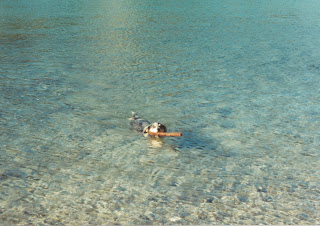 I went camping in the Coast Range last week and came back with a fifty pound sandstone boulder from the North Fork of Smith River. When I saw this rock, I remembered how much Bonnie loved camping and particularly how much she loved to retrieve sticks from the water, and I decided to bring it home and put it on her grave. Forevermore, I will think of her when I see it, and will picture her standing beside me when I found it because her presence was so strong within me. How, I asked myself, can such a joyous creature ever really die, but if it can, what is the good of life? I had no answers, and this made me want with all my heart to believe that she lives, but if not her, then at least the elements of which she consisted. A good rationalist would put the dead in their place and move on with life, but I carry the dead within me, and I can never entirely convince myself that they’re gone.

Long before Bonnie died, I saw her in the backyard one day. She was walking in one direction, and I was walking in the other, and we passed so closely that I could have touched her. “Hello Bonnie,” I said as I wondered why a dog with no place to go would be going there so resolutely. A few moments later, I saw her asleep in the front yard, but she couldn’t have gotten there from the backyard because they were separated by four gates (two on each side of the house) that were all closed. My rational mind knew that Bonnie couldn’t have been in both places, and I agreed with my rational mind, yet I had seen her in both places. Such occurrences put me in the crazy-making position of disavowing that which I want to believe in favor of that which I want not to believe because the former seems so improbable and the latter so rational.

Do I consider it even remotely possible that Bonnie (or, at least, Bonnie's image) might have been in two places, or that there is consciousness apart from what we call life? Yes, very remotely, for four reasons. One is that I can imagine all manner of extraordinary things that are unknown to science (which, after all, is only a few hundred years old and the province of a primitive species). The second is that people in all times and all places have had all manner of amazing experiences similar to some that I have had from childhood onward. Thirdly, such occurrences don’t contain internal contradictions as do, for example, descriptions of "loving" deities that behave viciously. Finally, it would be irrational for me to deny any possibility of an underlying reality behind my experiences simply because people who believe such things strike me as credulous or because it pleases me to consider myself a rationalist.

I wouldn’t attempt to give odds for having really seen Bonnie in two places because I don’t know enough to give odds for that in the same way I could give odds for it raining in western Oregon tomorrow (0-10%, the same as everyday in July), but any odds greater than none would mean that it was possible. Even if they were only one in a trillion, pretty much everything in the universe would seem to qualify. For instance, if you were able to list all the things that had to happen exactly as they did from the dawning of creation just for you to exist, it would surely take many lifetimes.

It is for such reasons that I remain, to a minute degree, open to the acceptance of things I can't clearly define, things that most rationalists would flatly deny. All I have to offer in this regard are feelings, questions, and a few unexplained experiences, but they are sufficient to make me unwelcome among rationalists, and insufficient to make me welcome among people who consider themselves psychic or spiritual. I simply don't know enough to belong to either camp, so I stand alone where the light filters through the trees and makes ever-changing patterns and shadows that both delight and torment. I just wish I could  settle my mind on what is true. A good rationalist, or a good believer, would say that he already knew.