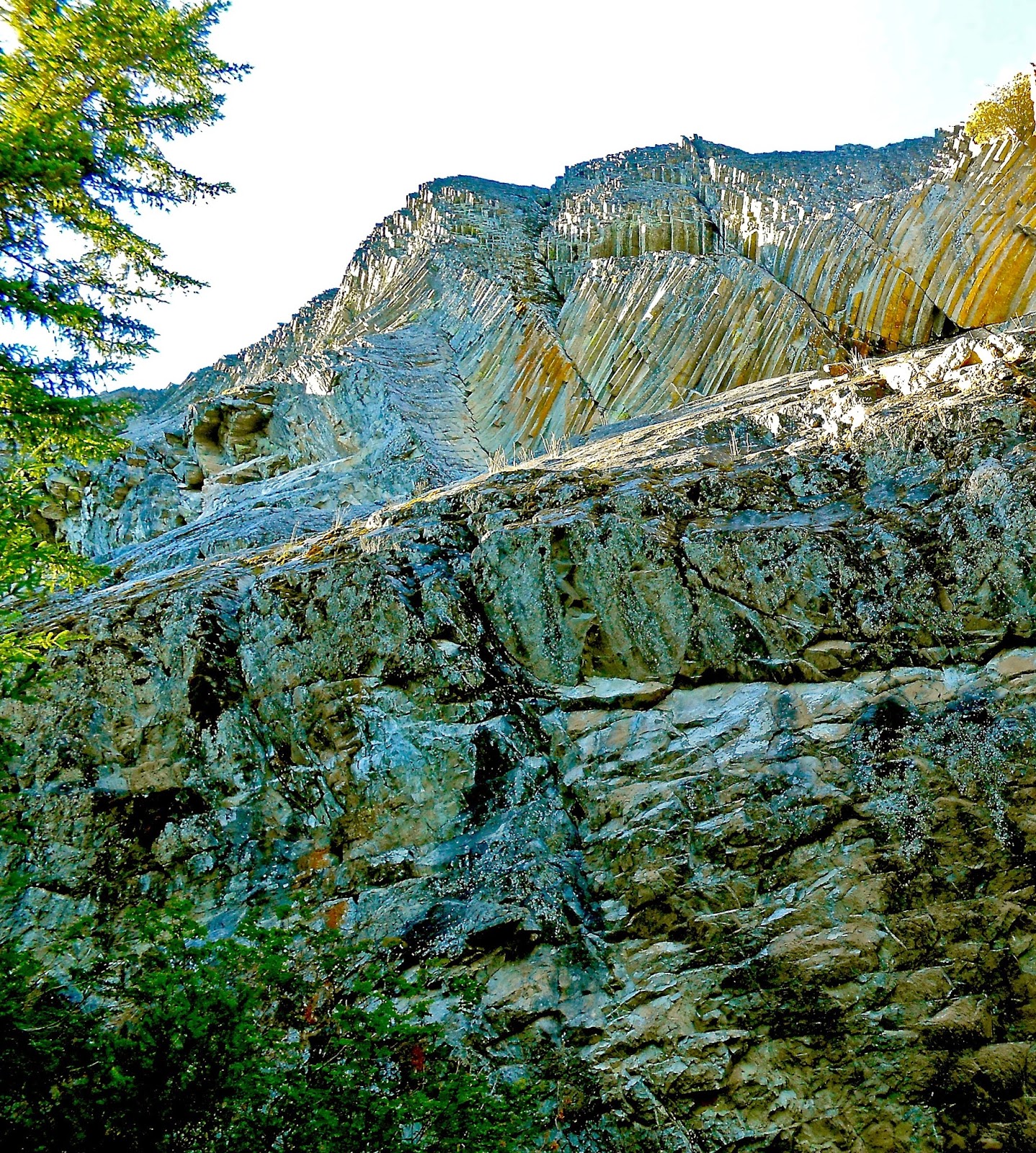 The Indians considered Symbol Rock sacred, and I can understand why. Unlike them, I know its approximate age, mineral content, and how it formed, yet knowing all this makes it seem no less miraculous. Why, then, does it lies ignored on the side of an abandoned logging road? Surely, there are other people who go there as if on pilgrimage, but I have't seen them.

Last week, I wanted to bring a piece of it home, there being thousands of fallen blocks, but I worried that doing so would be a desecration. I had decided against it when, after much discussion and reconnoitering, Peggy and I made a summit attempt. We proceeded on all-fours on rock so loose and exposures so precipitous that we could have been killed had we fallen, but we finally made it to the knife-edge ridge. The summit itself was hundreds of feet distant, and Peggy demurred, so we turned back. I felt good about turning back because what I most wanted was for us to be together, and because having made the attempt made me feel okay about taking a piece of the rock home--having given something of myself to Symbol Rock, I imaged that Symbol Rock was willing to give a piece of itself back to me.

We take from the earth with little thought about the morality of doing so, and with no thought about whether the earth itself might object. I do this myself. To give an example, when I replaced our wooden fence in 1997, I didn’t agonize over whether it was ethical to support the killing of trees and the destruction of habitats so that I could have a fence. This year, I gave the matter a lot of thought, and would have considered chain-link as an alternative had Peggy agreed, but she did not, and I eventually bought wood. The trees are no less dead for my guilt, the habitats no less destroyed, and the earth, perhaps, no less offended, but I take some small comfort in knowing that I’ve grown more desirous of mitigating the damage I do.

Science is increasingly discovering that life—if not the universe as a whole—is more complex and interrelated than previously thought. For example, rather than only being “red in tooth and claw,” living things are also more cooperative—if not altruistic. For instance, mature Douglas Firs have been shown by experiment to share nutrients with young Douglas Firs, and other examples of “lower species” altruism are ever increasing. Unlike many, I wouldn’t credit such things to the supernatural (images of a god who consists of some undefinable material that is separate from and superior to everything else in the universe doesn’t fit with any fact that I know, or can imagine, or would want to entertain), but to something that I consider far more interesting, which is a web of underlying connectivity that might someday be shown to not just involve obviously interrelated lifeforms but life as a whole.

My guess is that it also extends to what we now consider non-life and that it includes universal consciousness. I speculate, of course, but if I were to be penned down as to what I believe metaphysically—or at least to what I think might be the case—I would have to say that from my earliest childhood, I have believed that all things were conscious, and that I still think it might be true. When I wrote recently about my difficulty in reconciling my heart and intellect, this is one of the conflicts that I had in mind.

I don’t believe in universal consciousness because I believe it’s true, but because I can’t believe it’s false. The amount of credibility that I give to it varies. In the presence of Symbol Rock, I was 75% sure, but as I write this, my degree of certainty is half that. This is a major issue in my life, if only because an acceptance of it would paint the universe as other than a place of meaningless darkness, meaningless frigidity, and meaningless emptiness. Unfortunately, even my desire to believe makes me mistrust the fact that I do believe. No matter how far afield my imagination takes me, I always come back to the certainty that truth matters more than happiness, but this doesn’t necessarily make truth easier to recognize.
Posted by Snowbrush 15 comments: Links to this post